The game is an sandbox(ish) game in which u play with May. A student in an unnamed city. Overall idea is to create a slow corruption type of game.
A day in game consists of 4 sections:Morning,Afternoon,Evening,Night.
There is about 2 weeks game play in current release depending on your how you play.
This game has been inspired by Valentina Story. Which gave me the inspiration in using Illusion’s SBPR for the pictures in combination with RPGmaker Ace.

-Bug fixes:
-Fixed: Bug that left players stuck inside the library during the library job when the 2nd outfit became available.
-Fixed: Having to pressing D twice to temporally remove the overlay picture. Pressing D once should now be enough.
-Fixed: May’s exhibitionism is now raised correctly when she masturbates outside on the balcony if the cap for this event hasn’t been reached yet.
-Fixed: Can now buy stuff at the beach store even when May has “lost” her panties.
-Fixed: Saying no at the start of the 2nd science teaching even should now work as intended.
-Fixed: One of the CG displayed during the first modeling event had the wrong resolution. 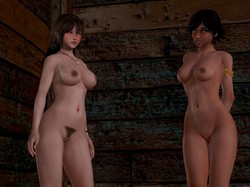